This page is in chronological order starting with the OLDEST entry…..

There are lots of decisions that go into the process at this point. How much insulation? Where and how big is the bed/furniture. Where do cabinets go? Electrical components?

So, with all those considerations in mind I got busy. First off, I am not going to the North Pole, in fact I am not going boon docking for extended periods without a generator. So, energy efficiency is not the holy grail here. Some is desired, yes. As the box is it’s not doable. So, simple insulation. Low-E, adhered to the walls with 3M-90. Easy, fast and not too expensive. In the deep cavities I added some fiberglass battens. Yes I know, not rated for automotive applications, but it’s fine in RV’s and there’s not a lot of it. Also, it’s not up against the steel anywhere. 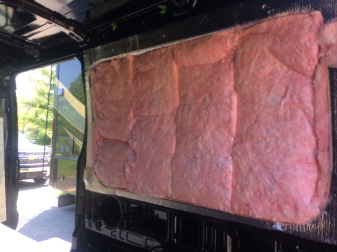 Then I set about making panels. In keeping with the “I have to be able to take it to a body shop if needed” philosophy they are removable. They are attached to the walls with riv-nuts in existing holes, and bolts through where accessible (along the bottom). I decided on an “East-West” bed configuration so I built extension boxes where there was room for a few extra inches of room. The bed will now be over 6 feet. I used a large piece of heavy mill plastic to map out the holes (red dots) for the fasteners and to cut the panels to shape. I was also able to flip the template for the other side… Very efficient. 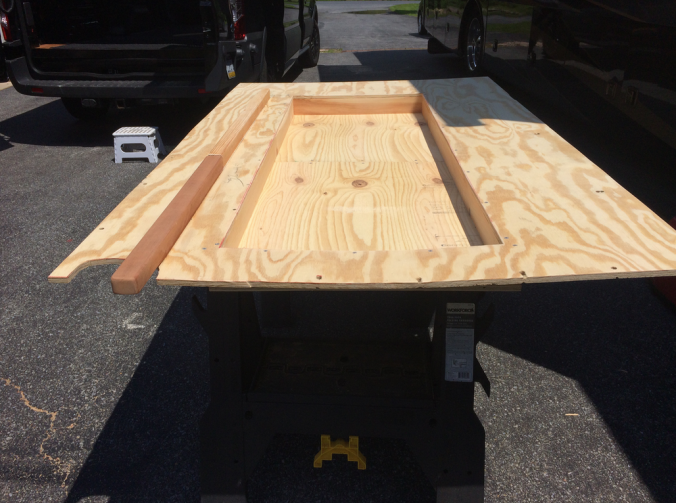 The bottom panels will also be easily removable to provide access to the cavity behind.

Next it was time for the ceiling. Same MO: Low E, then wood “beams” attached to the ribs with riv- nuts, panels of Luan resting on the beams in between. The first section:

February 2018. Had some time and gave it a good push. Ceiling finished. Continued the same way forward. Painted the fan bezel black and added a bunch of screws to have it conform to the ceiling a little more. Took the factory lights out of the “header” and put them in the ceiling panel using a wall outlet/switch plate that I painted. Superglued the light to the plate. Also spliced in a wire that I can run to a switch so I can make them not come on, period. Visible in the back ground, together with the power supply to the fan.

And then… the bed. It’s in, in two pieces. Either a single or a double (almost Queen) with a slide out piece. The couch is out of a 1986 Range Rover Classic which I parted out years ago… Mounted it on a nice 4×4 which in turn is lag bolted into the floor. Pretty nifty! There’s a bulkhead behind the seats which completes the partition of the utility space in the back. 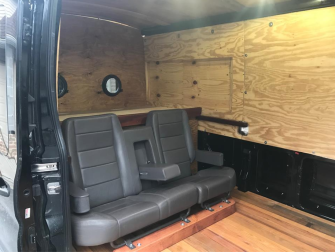 Bought a mattress on Amazon which is foam, with a few inches of memory foam glued on. About $180 for a queen which is pretty good. Cut it to fit the bed, in two pieces for single or double use. Very comfortable, and you can’t feel the seam between the two pieces…. 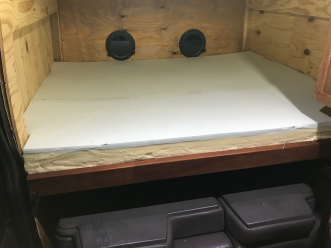 Insulated the lower part of the driver’s side wall and made plywood covers. At the bottom they slide between the wall and the floor, at the top they bolt into the existing threaded holes. You can see a black shielded wire coming out the right side… this is the cable that will connect the three 60A DC CCP’s (Customer Connection Points) under the driver’s seat to the inverter in the electronics compartment behind the back seat. More on that later in the electrical section. In retrospect I could have just run it through the cabinet like I will the 120AC……

Got busy in the shop and made a base cabinet. Fridge, portapotty, sink, a place for a small water and grey water tank, garbage….. One piece in keeping with the modular plan, a backbone board bolted into the existing threaded holes. The hole is for the garbage can. A nice chrome pan lid for a cover. More details on the plumbing later. 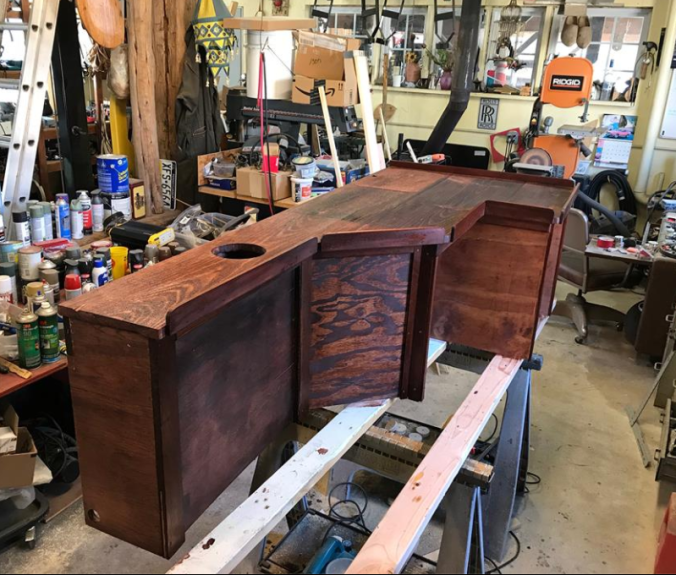 There’s a small curtain rod in the potty opening to fit a curtain when the sewing machine comes out. I want that compartment to breathe. (Dilution is the solution 😉 )

Put in upper cabinets. No I didn’t make them. They were $100 at Home Depot. I can’t make them for that. Did make a two leg base so the weight is distributed. They are also screwed to the wall. Should hold up nicely. 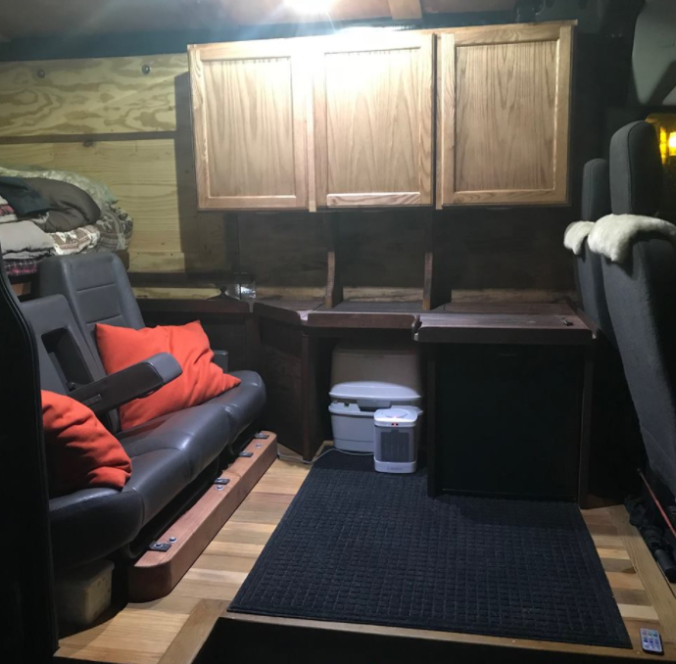 Installed cockpit curtains. For stealth and as a thermal barrier between the house and the cockpit which is where a LOT of the thermal loss with the outside world takes place. 1/2″ copper pipe with a pair of rod brackets from HD on the forward ceiling trim. On the sliding door side I sewed magnets into the hem to neatly close the gap…. Used the same fabric to make a little curtain for the porta potty.

Well, getting close in the interior. I need to do some padded covering around the bed. A privacy/thermal curtain of some sort on the slider and lastly insulated covers on the cockpit windows. And, there’s some work to do on the lighting. For now, and maybe for a long time, I’m using LED pucks, battery powered, with a remote. Too cheap and too much fun. 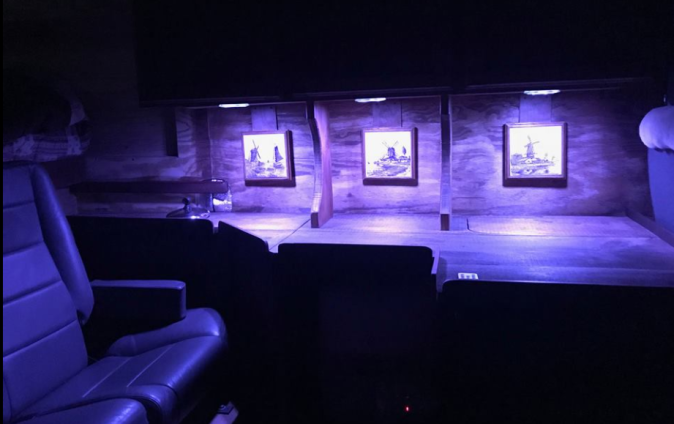 Well, I’m about done in there. The rear has been finished with vinyl with “Chesterfield” look and I’ve installed the sound system. (There was some trickery there, will have to post. Here’s the look…. 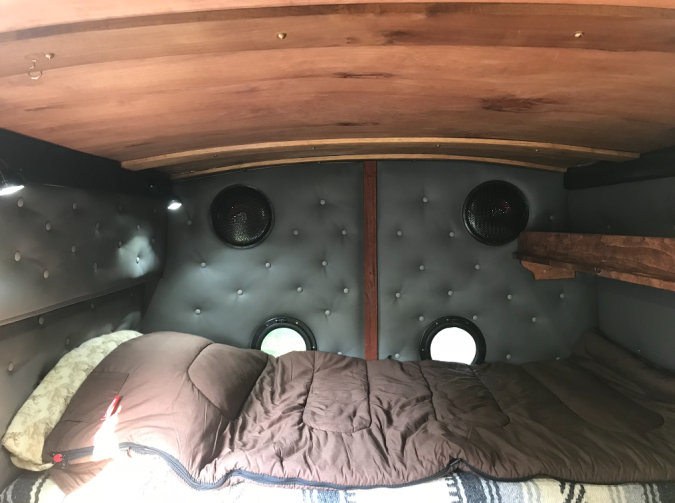 And the side….. (shelf not shown yet) Must say I’m pretty happy with it all…….